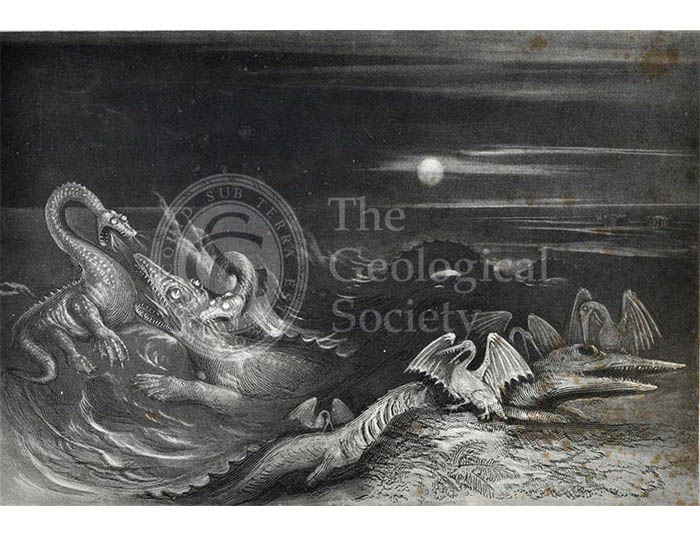 Description: This image by John Martin (1789-1854) depicts Jurassic life in the artist’s typical nightmarish and gothic style.  On the left, two plesiosaurs are attacking an ichthyosaur, whilst on the right pterosaurs are scavenging the corpse of another.

The eccentric fossil collector Thomas Hawkins (1810-1889) had amassed an apparently enviable collection of ichthyosaur and plesiosaur remains from Somerset and Lyme Regis – the latter through Mary Anning.  He produced two volumes on his collection, ‘Memoirs on Ichthyosauri and Plesiosauri’ (1834) and ‘The book of the great sea-dragons, Ichthyosauri and Plesiosauri … gedolim taninim, of Moses.  Extinct monsters of the ancient earth’ (1840), both in connection with its sale to the British Museum.  Unfortunately, it would be discovered after the purchase (for over £3000) that Hawkins quite freely filled in any missing bones with plaster, and some specimens were almost entirely ‘restorations’.   Hawkins’ collection is now held by the Natural History Museum, London.

Source: Frontispiece to Thomas Hawkins’, The book of the great sea-dragons, Ichthyosauri and Plesiosauri … gedolim taninim, of Moses. Extinct monsters of the ancient earth. With thirty plates, copied from skeletons in the author’s collection of fossil organic remains, (deposited in the British Museum). London: William Pickering (1840).