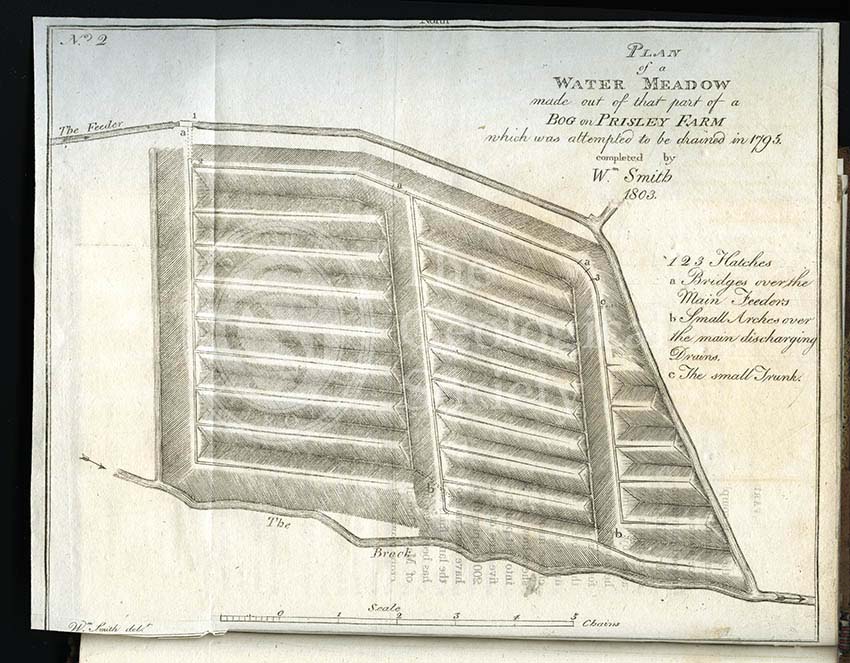 Title: ‘Plan of a Water-Meadow made out of part of a Bog on Prisley Farm which was attempted to be drained in 1795’

Description: Water-meadows are areas of agricultural grassland where irrigation is strictly controlled through the use of sluice gates or hatches to feed in the water, which systematically drains through the meadow, with the excess passing into ditches and drains to be discharged into a river, or in this case a brook. The intention was to keep the ground damp, allowing multiple and larger yields of crops of higher quality of grass for sheep and cattle.

A Mr Elkington had attempted unsuccessfully to drain the Prisley Bog in 1795. Despite claiming that only one main drain would be necessary, it didn’t work and subsequent additional drains also made little difference. William Smith remarked that eight years later the appearance of the bog “would have induced a stranger to think that any drainage of it had ever been attempted.” Smith worked on the drainage of the Prisley Bog between 1802-1803.

Smith published an account of this successful project in a number journals of the day, but also included it in his first published memoir in 1806. This ‘treatise of irrigation’ is a rather wordy affair, with Smith frequently going off topic as well as taking the opportunity to include verses of his own poetry.

Source: ‘Observations on the Utility, Form and Management of Water Meadows and the Draining and Irrigation of Peat Bogs, with an Account of Prisley Bog and other Extraordinary Improvements, Conducted for His Grace the Duke of Bedford, Thomas William Coke, Esq,MP, and Others’, Norwich: Printed by R M Bacon for Longman, Hurst, Rees and Orme (1806). Plate 2.