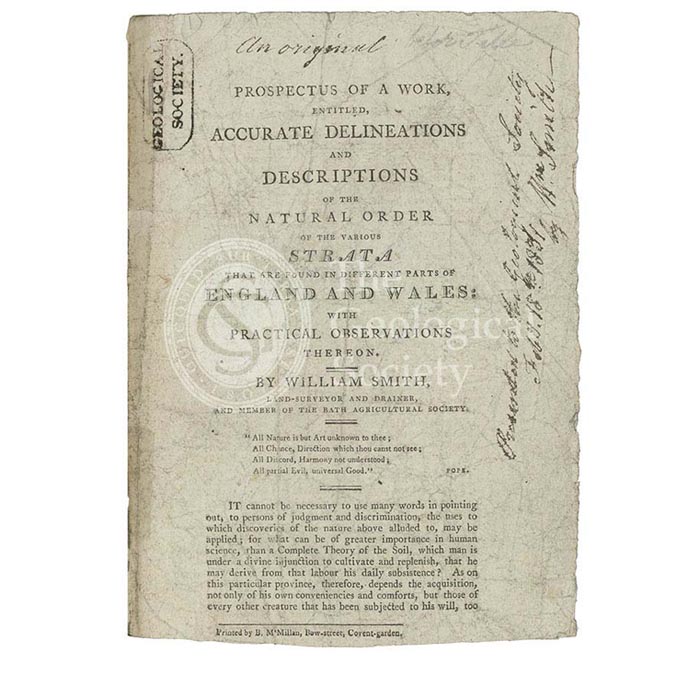 Title: Prospectus for William Smith’s ‘Accurate Delineations and Descriptions of the Natural Order of the Various Strata…’

Description: Printed prospectus for William Smith’s projected published work, ‘Accurate Delineations and Descriptions of the Natural order of the Various Strata that are found in the Different Parts of England and Wales with Practical Observations Thereon’, 1 June 1801.

This small, four page prospectus advertised what would have been William Smith’s first publication, setting out his stratigraphical theories. The single volume work, which was to have been published by November 1802 at the price to subscribers of two guineas, was to be arranged under the separate headings of each strata with a map and sections in proper colours “to make them more striking and just representations of Nature”.

The prospectus provided an exhaustive list of professions who would find the work extremely useful, from philosophers, miners, artists, architects, glass-makers, chemists, colour-men, brick-makers to potters. “Indeed” claimed the prospectus “there are but few of the most necessary occupations of life, that may not derive from this Work some useful hint or improvement.”

In the end, the work was never published, principally due to the repeated bankruptcy of Smith’s publisher John Debrett.

The pamphlet was one of a number of items gifted by Smith to the Geological Society in 1831 in thanks to his being awarded the Wollaston Medal. The writing is Smith’s.

Source: The pamphlet has been pasted at the front of the Society’s copy of Smith’s ‘Stratigraphical System of Organized Fossils’ (1817), both for safekeeping and because parts of the proposed work were incorporated into this publication. 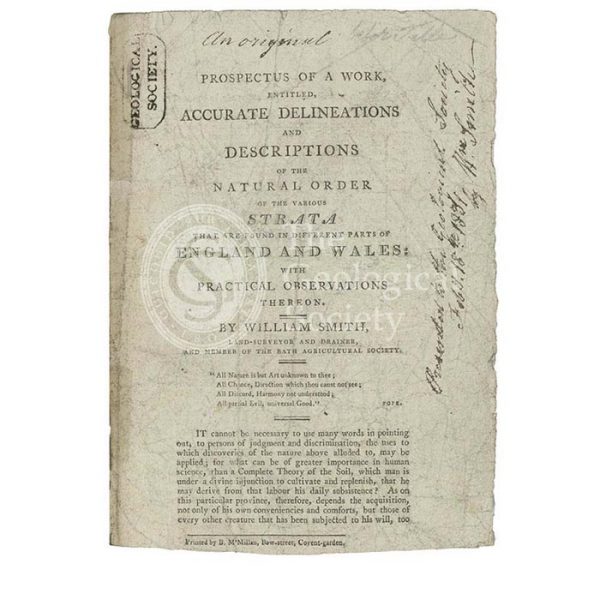 «Prospectus for 'Accurate Delineations and Descriptions of the Natural Order of the Various Strata...'