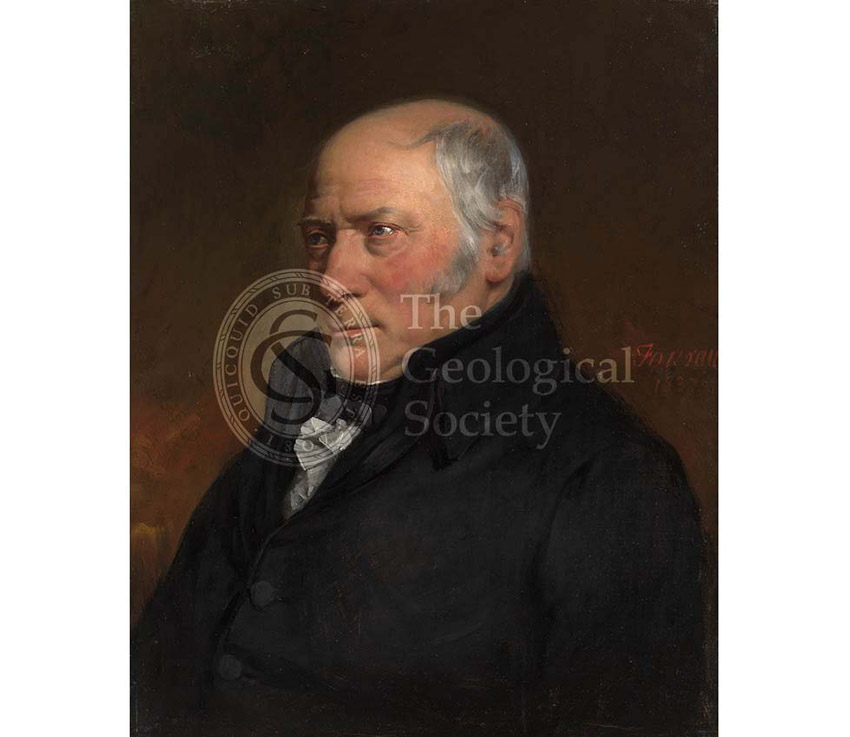 Description: Painting of William Smith. The son of an Oxfordshire blacksmith, he was the first person to recognise the importance of fossils in identifying strata of equivalent age, thus enabling rocks to be correlated across country. Using his geological knowledge, he made his living as a surveyor and engineer and his work involved him travelling up and down the country, during which he recorded the rocks he saw. The principal result of this first hand observational work, was his map of England and Wales (published in 1815) – the first geological map of a country ever made.

Despite this achievement, Smith was never a Fellow of the Society, probably due to his low social and economic status. ‘Strata Smith’ or ‘The Father of English Geology’ was, however, the recipient of the first Wollaston Medal in 1831 – still the Society’s highest award.

According to William Smith, writing on 29 June 1839, “In the summer of 1838 [sic, the portrait was actually painted in 1837], a tall, well-grown, fine-looking young gentleman from France, for a very short time became an inmate at my lodgings, 6 Lancaster-place, Waterloobridge, and had not been there more than three or four days before he said he ‘should like to take my portrait – it would make a good picture – if I would permit.’ I told him I could not afford to pay for it. ‘Oh,’ says he, ‘artists are never paid.’ Consent being given, he said, ‘Tomorrow me at 8, you at 10;’ and accordingly in the morning at 10 I found in my room he had prepared the canvas, put on his painter’s silk gown of all colours, adjusted the lights, placed me in one chair and himself in another, set to work, without any easel, and by 4 o’clock in the afternoon, with about half an hour’s re-touching the next morning, he produced a fine oil painting. “I never saw a man stick so closely to his task or handle his tools so dextrously. There was no time lost in idle conversation, for he could speak but few words of English, and I none of French.” It was thus, by the skill and generosity of my much esteemed young friend M Fourau, I became possessed of a fine oil painting. He requested me to write on the back of it – Portrait of Dr. William Smith, painted in London, which I did in a strong hand.” from Phillips, J, ‘Memoirs of William Smith, LLD’ (1844) p125-126.

The painting was presented to the Geological Society by Smith’s nephew, William Smith (of Cheltenham) in 1880. The frame contains a lock of Smith’s hair presented by Thomas Wright in 1884.