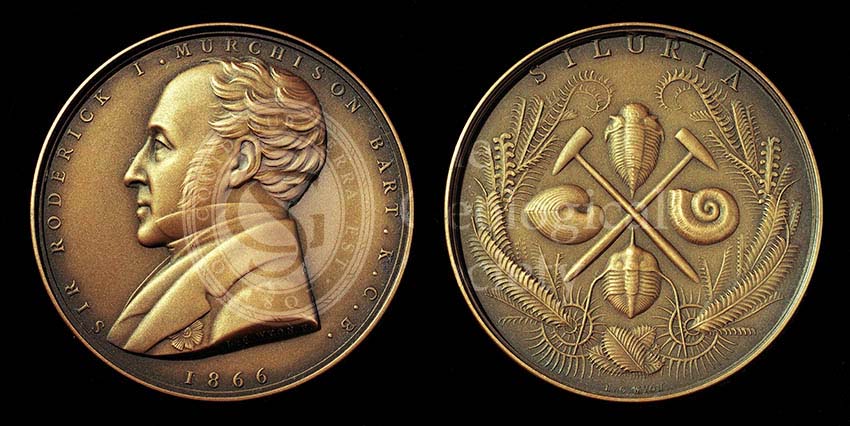 Description: The Murchison Medal is normally given to people who have made a significant contribution to the science by means of a substantial body of research. Workers in both ‘pure’ and ‘applied’ aspects of the geological sciences are eligible, the Murchison Medal being given for contributions to ‘hard’ rock studies.

Background
Established in 1871 under the will of Sir Roderick Impey Murchison (1792-1871), who bequeathed the sum of £1000 to the Society. The annual income was to ‘be applied in every consecutive year in such a manner as the Council [of the Geological Society] may deem most useful in advancing Geological Science’. It was customary that ten guineas accompanied the Medal, the rest of the balance given as the Murchison Fund.

Obverse: Portrait of Sir Roderick Impey Murchison, dated 1866. The dies had been originally prepared in 1866 for a medal to be awarded by the Royal School of Mines.
Reverse: Two geological hammers in saltire, between them a series of fossils surrounded by a border of Graptolites, under the word ‘Siluria’, the system which Murchison was the first to identify. The fossils are: trilobites Encrinurus punctatus & Ampyx nudus; brachiopod Pentamerus Knighti; and gastropod Euomphalus rugosus.