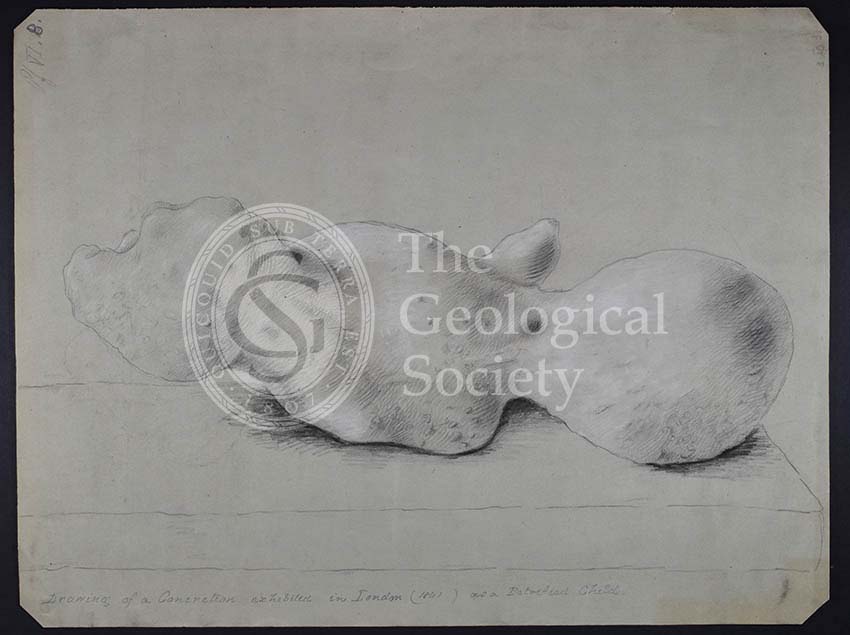 Description: Drawing of the ‘Human Fossil’, from Belgium, which was exhibited in Leicester Square, London, in June 1840 at a cost of £1 per person entry. The accompanying handbill claimed that this was the fossil of an ‘ante-diluvian child’, that is a fossil of a child who lived before Noah’s Flood.

In the first half of the 19th century, scientific studies for some were still heavily influenced by religious beliefs, indeed many of the Geological Society’s early members were Anglican clerics. Geologists, such as the Reverend William Buckland (1784-1856), theorised that the large number of diluvial deposits found throughout northern Europe and around the Alps, were evidence of some kind of ‘mega-tsunami’, and suggested that this was the biblical deluge. In the 1840s, however, the Swiss naturalist Louis Agassiz demonstrated that these signs could be attributed to the actions of glaciers during the Earth’s Ice Age.

This particular example is likely to be a ‘concretion’ that is a mineral mass which forms between layers of sedimentary rock.