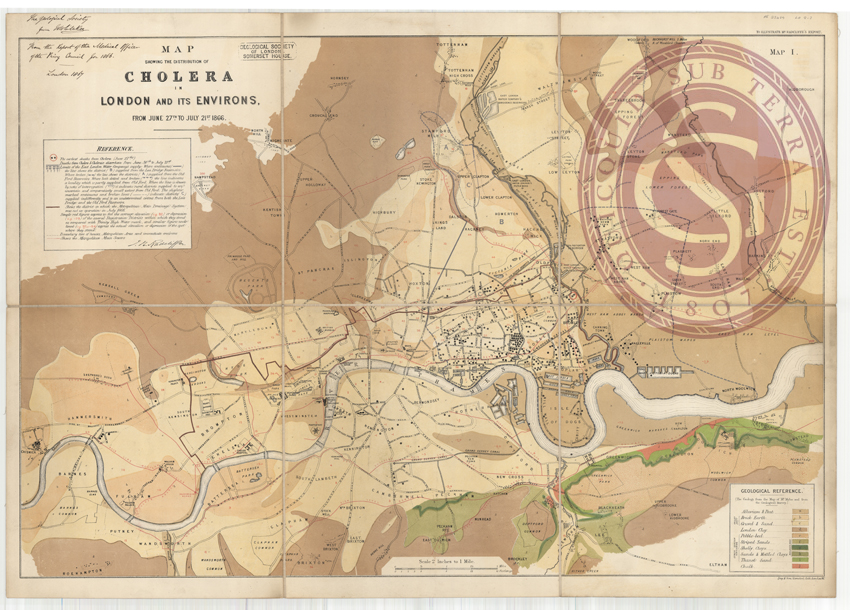 Title: Map showing the distribution of cholera in London and its environs from June 27th-July 21st 1866

Description: In 1866 Britain suffered its fourth epidemic of Asiatic cholera.  Deaths from the milder ‘British’ cholera or choleraic diarrhoea were common amongst London’s poor due to the living conditions and lack of clean water supply. This disguised to a certain extent the detection of the more deadly form when cases began to appear in the city in June 1866.

From July, the nature of the epidemic became clear and case numbers exploded. The week ending the 14th July saw 32 deaths registered, but by the 4th August 1,053 people died within the preceding seven days. After 23 weeks from the outbreak of the epidemic, there were 5,548 deaths recorded in London, 3,909 were of people living in the East End.

The creation of this geological map was influenced by the German chemist and public health official Max von Pettenkofer’s (1818-1901) now outdated theory that cholera epidemics would only happen under particular circumstances. It relied on three elements combining: the standard of health of the individual; the environmental/meteoric conditions; and the disease ‘fermenting’ in the groundwater of low level areas.

The medical officer J N Radcliffe marked the distribution of cholera deaths which occurred between 27th June and 21st July 1866 on a geological map to analyse whether the localised geological and topographical conditions had any bearing on the infection. Pettenkoffer was indisposed so Radcliffe called upon the services of Society Fellow William Whitaker (1836-1925) to help him. The geology on the map is taken from Robert Mylne’s ‘Topographical [and Geological] Map of London and its Environs’ (1851). The map demonstrates that neither the geology nor the elevation/depression of the land had any bearing as the most affected places shared similar conditions to those which were hardly touched.

Instead it shows that the areas with the highest mortality rate shared a common water supply from the Old Ford reservoir operated by the East London Waterworks Company.  The intake source on the River Lea was below the outlet for one of the main sewers for London, and the only treatment (filtering) was obstructed during the summer months by thick, slimy growths of algae.

In 1883, the German microbiologist Robert Koch (1843-1910) discovered the bacterium Vibrio cholera which caused cholera. Pettenkofer, in a bid to prove that his tripartite idea was still valid, drank a sample containing Vibrio cholerae supplied by Koch in 1892. He suffered symptoms for around a week afterwards.

Scale approximately 1 mile to 2 inches or 1:31,380. Published with the Report of the Medical Officer of the Privy Council.

Format: Hand-coloured. Printed on paper, dissected and mounted on linen 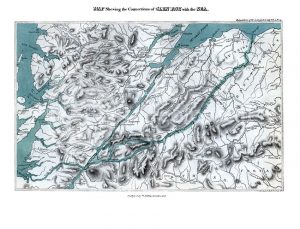 «Map shewing the Connections of Glen Roy with the Sea (Cross, 1817) 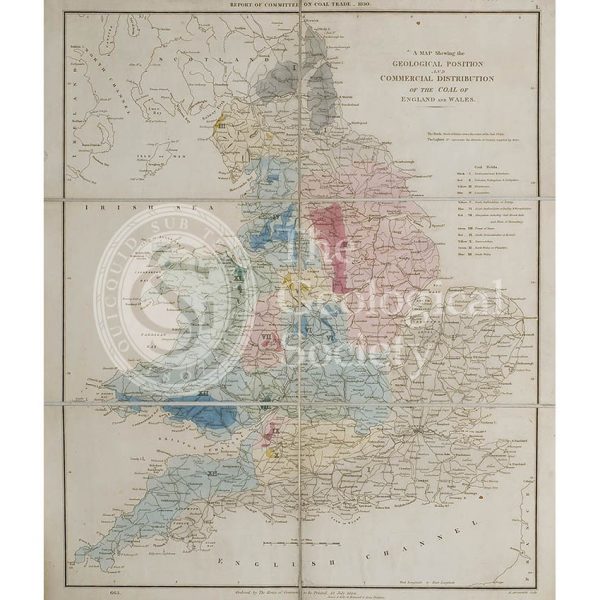 Map showing the Geological Position and Commercial Distribution of the Coal of England and Wales (House of Commons, 1830)»
We use cookies on our website to give you the most relevant experience by remembering your preferences and repeat visits. By clicking “Accept All”, you consent to the use of ALL the cookies. However, you may visit "Cookie Settings" to provide a controlled consent. further details can be found on our Cookie Policy page
Cookie SettingsAccept All
Manage consent