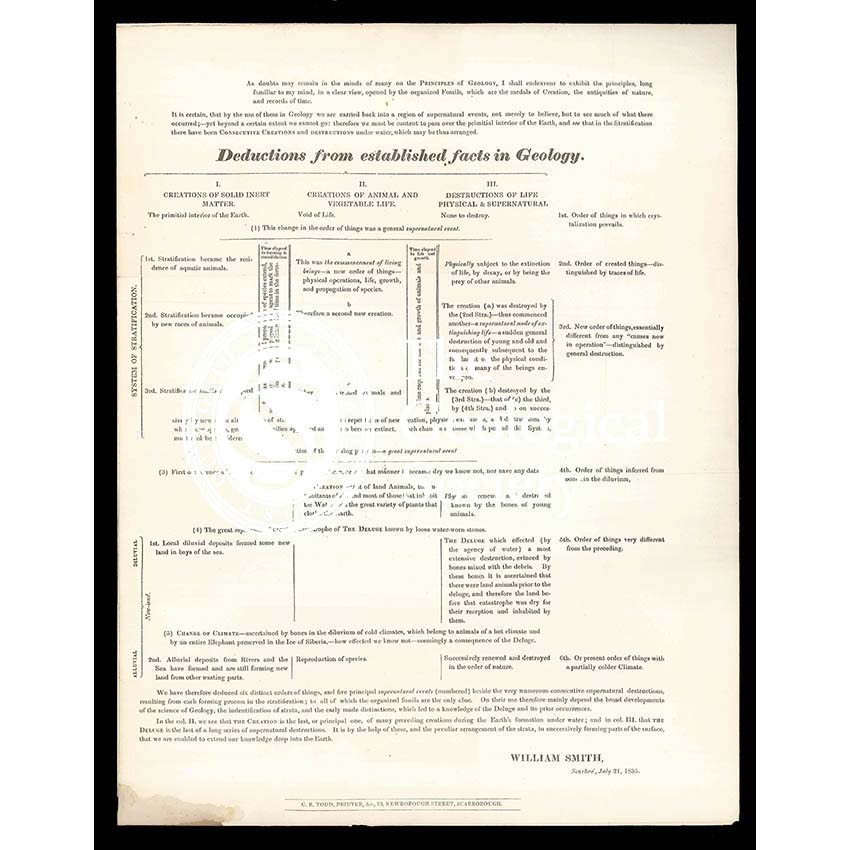 Religious concepts, for some, influenced geological thinking during the first half of the 19th century. Many of the Society’s members were Anglican clerics or held deep theological beliefs and saw the science as a way of explaining the creation of the Earth, for instance observations of vast areas of the Earth being covered in water were interpreted as the Noachian flood but later ascribed to glaciers, that is the Ice Age. Fossils, in this context, were termed ‘Medals of Creation’.

William Smith, towards the end of his life, produced the above broadsheet which tabulated how his stratigraphical theories fitted in with theological views about the creation of the Earth.

“As doubts may remain in the minds of many of the PRINCIPLES OF GEOLOGY, I shall endeavour to exhibit the principles, long familiar to my mind, in a clear view, opened by the organized Fossils, which are the medals of Creation, the antiquities of nature, and records of time.

It is certain that by the use of these in Geology, we are carried back into a region of supernatural events, not merely to believe, but to see much of what there occurred; yet beyond a certain extent we cannot go; therefore we must be content to pass over the primitial interior of the Earth, and see that in the Stratification there have been CONSECUTIVE CREATIONS and DESTRUCTIONS under water which may be thus arranged.”

Smith theorised that there were distinct ‘orders of things’ which were subject to ‘supernatural events’ which repeatedly created and destroyed each strata of life in turn.
Date: 21 July 1835 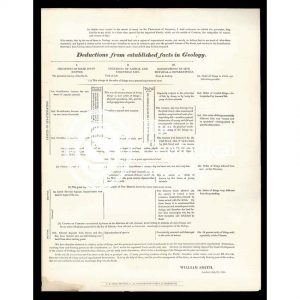 «‘Deductions from established facts in geology'