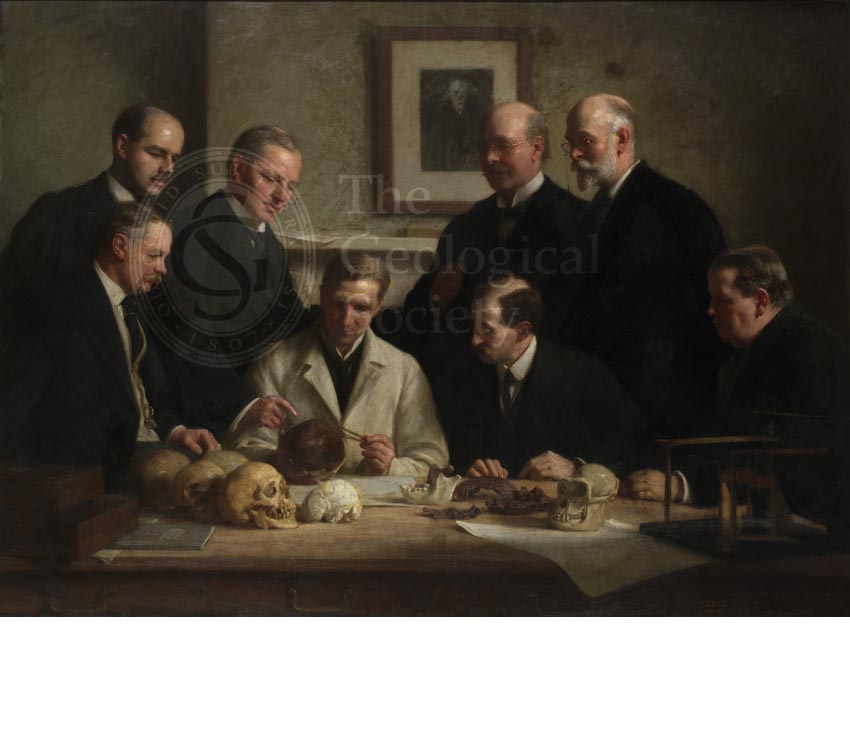 Title: Discussion on the Piltdown Skull

Description: One of the Society’s most popular paintings, ‘Discussion on the Piltdown Skull’ commemorates a meeting of a group of scientists at the Royal College of Surgeons on 11 August 1913 who were continuing their discussion on the skull and jaw fragments of ‘Piltdown Man’ which were first presented at an Ordinary General Meeting of the Geological Society on 18 December 1912.

Between 1908 and 1912 Charles Dawson recovered the remains of a human skull from a reputedly ancient gravel bed located at Barkham Manor, near Piltdown in Sussex. Fossils of Neanderthals had already occurred in Germany and France. British Scientists were desperate to prove that Britain had also played its part in the story of human evolution, so Piltdown Man was the answer to their prayers – because of him, Britain could claim to be the birthplace of mankind.

In 1953, using the more modern dating techniques now available, Dr Kenneth Oakley from the Natural History Museum tested the remains and found that the skull fragments were not as ancient as originally claimed but instead 500 years old and the jaw came from an orang-utan. The teeth had been filed down to mimic a human like wear pattern and the remains had been boiled and stained to match the colour and antiquity of the Piltdown gravels.

The painting was produced by the artist John Cooke especially for exhibition at the Royal Academy in May 1915, where it was on sale for £750. It didn’t sell, but was so popular that cheaper lithographs were made and sold at a few guineas each. The painting remained in the artist’s collection, where it was purchased from his estate after his death for the smaller sum of £25 by Charles Taylor Trechmann, who then gifted it to the Society.

The sitters are (from back left to front right):