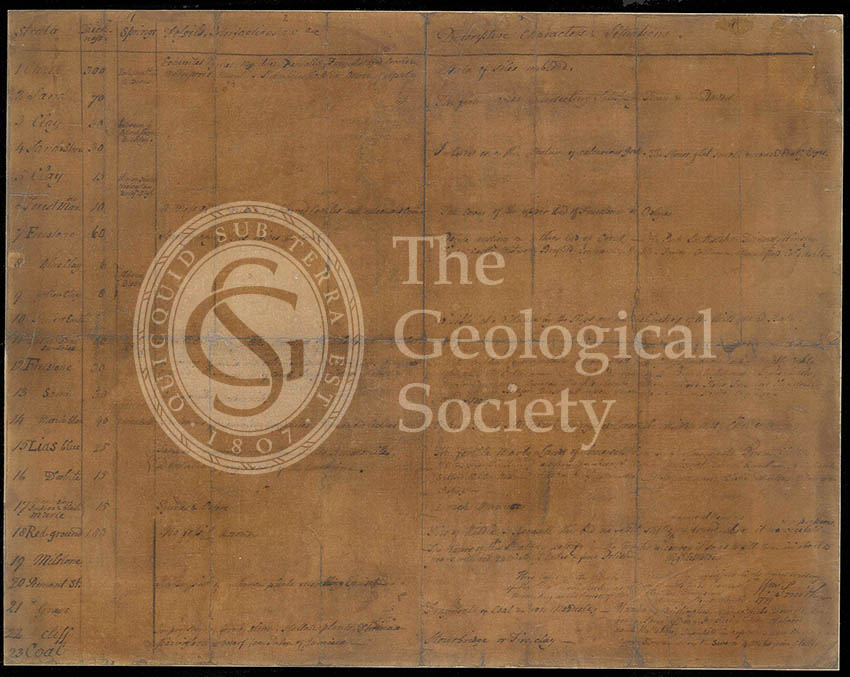 Title: Table of Strata in the Vicinity of Bath

Description: Manuscript table listing the strata in the vicinity of Bath by William Smith, and written to his dictation by the Reverend Benjamin Richardson.

This unique, rather faded manuscript table is William Smith’s first attempt to lay down the order of the layers or rock, or strata, which he observed in Bath. Dictated by Smith, and in the handwriting of the Reverend Benjamin Richardson (1758-1832), it was one of a number of items gifted by Smith to the Geological Society in 1831 in thanks to his being given the Wollaston Medal.

Smith had met Richardson during the Annual Meeting of the Bath Agricultural Society in 1799. On viewing Richardson’s fossil collection at his residence in the city, Smith began pointing out to which beds they exclusively belonged. He later demonstrated the theory to Richardson’s astonishment out in the field. Keen that his discovery be communicated, Smith urged Richardson to write to his friend the Reverend Joseph Townsend (1739-1816) of Pewsey (who was also in Bath) who was equally astounded. Townsend had been studying the subject for nearly 50 years and had travelled all over Europe, but stated that no-one of his acquaintance knew of it either. The Table was created by the three men after dinner, when it was proposed that they should write down a tabular view of the subject. Each man took a copy of the table, with Smith annotating this version, “This Table of Strata, dictated by myself, is in the handwriting of the Rev Ben[jamin] Richardson, and was first reduced to writing at the house of the Rev Joseph Townsend, Pulteney St, Bath, 1799. William Smith.”

The Table is very faded and illegible due to it being hung proudly on the walls of the Society until the 1980s. Preservation techniques in the 19th and early 20th century unfortunately involved the generous use of varnish which has since discoloured. Additionally the original iron gall ink has burnt into the paper, further exacerbating the illegibility.