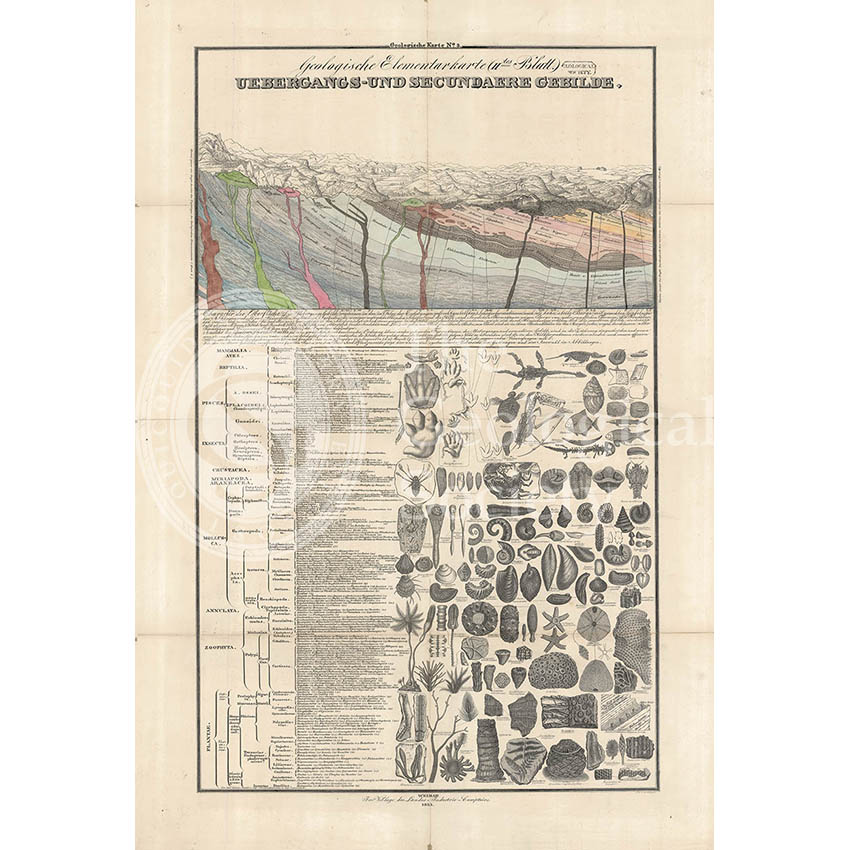 Description: One of three sheets (probably from an original set of six) which were clearly devised to be seen together as at the top of each is a continuous ideal section of the Earth’s crust intended to show the order of deposition of stratified rocks and their relations to unstratified rocks. Underneath are detailed lithographs of fossils, views and other geological images arranged according to the time period from which they originated.

Not much is known about the three plates, other than that they were in the possession of George Bellas Greenough, and formed part of the bequest given to the Society in 1856. The plates still bear Greenough’s original labels on which he states that the contents had been taken without acknowledgement from William Buckland’s ‘Bridgewater Treatise’ [Geology and mineralogy considered with reference to natural theology, published in 1836]. Whilst the striking top section is obviously based on the one included in the ‘Bridgewater Treatise’, in fact the publishers, Im Verlage des Landes-Industrie-Comptoirs, reference a number of contemporary works from other leading scientists of the day including Louis Agassiz (1807-1873), Charles Lyell (1797-1875) and Georges Cuvier (1769-1832). Hence the plates describe what was known of the subject at the time of publication – a lesson in elementary geology if you like.

This plate shows Transition to Secondary structures, equivalent to the modern geological time terminology of Late Palaeozoic to Mesozoic eras.
These eras saw dramatic changes in the Earth’s natural history, notably the development of more sophisticated life forms such as fish, amphibians and reptiles, and the appearance flowering plants and conifers.

For a more detailed look at the plate, see the following exhibition: www.geolsoc.org.uk/Library-and-Information-Services/Exhib…

«Geological views and sections of Essex/Hertfordshire and between London and Cambridge (Smith, 1819) 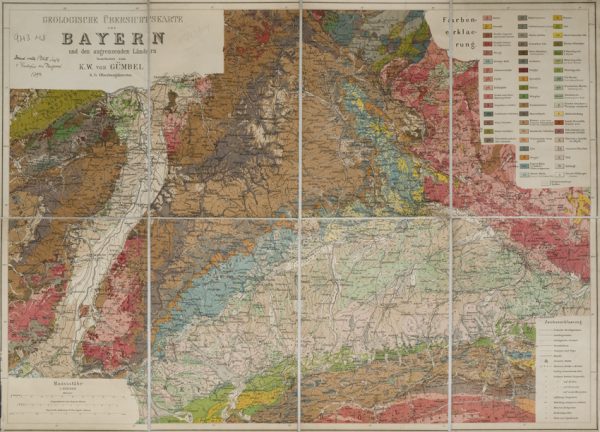 Geologische Übersichtskarte von Bayern und den angrenzenden Ländern (Karl Wilhelm von Gümbel, 1893)»
We use cookies on our website to give you the most relevant experience by remembering your preferences and repeat visits. By clicking “Accept All”, you consent to the use of ALL the cookies. However, you may visit "Cookie Settings" to provide a controlled consent. further details can be found on our Cookie Policy page
Cookie SettingsAccept All
Manage consent