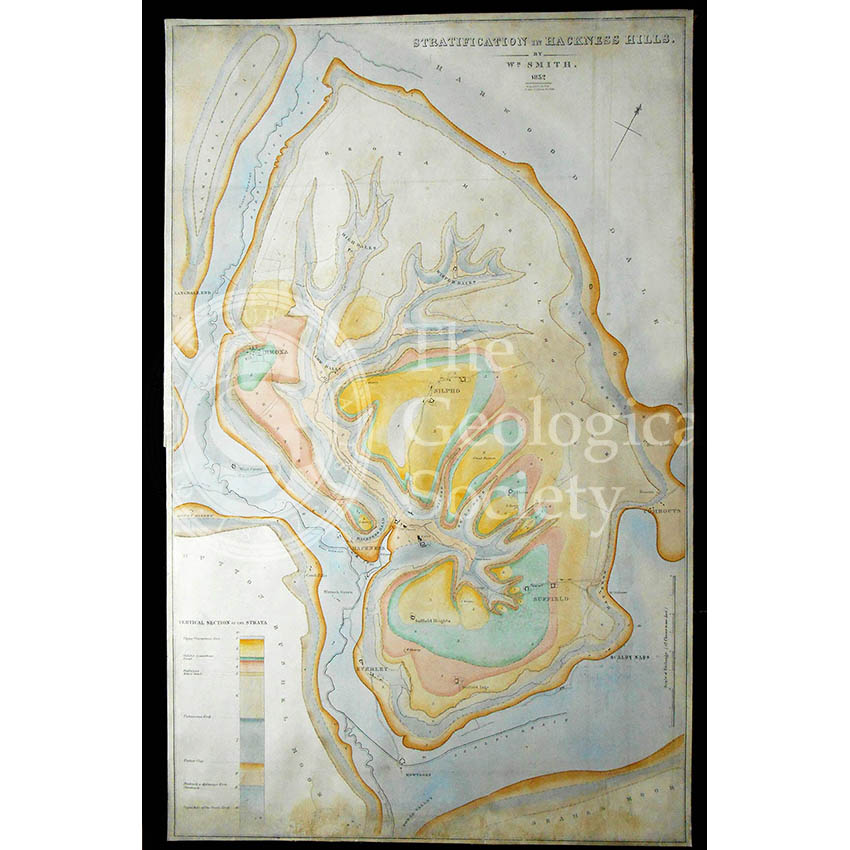 Description: This map, the ‘Stratification in Hackness Hills’, is William Smith’s last major work. Undertaken when he employed as a land steward to Sir John Johnstone, it was drawn at a scale of 6 ½ inches to the mile and is considered to be one of the earliest large scale geological maps constructed.

The base map is lithographed by W Day of Lincoln Inn Fields, London and is of a rougher quality than Smith’s earlier published maps by John Cary. Present, however, is his distinctive fading colouring technique to delineate the outcrops of strata. Very few of these maps were produced and it could be that Smith himself undertook the colouring.

Smith explained the map in an accompanying memoir:

“The principal object of the annexed map is a delineation of the GEOLOGICAL structure of some of the most irregular ground in England, namely, that around Hackness Hall. The valleys of this District, with their intermediate ridges of hills, both in form and Geological construction, may be considered unique….On Knox’s excellent map of the vicinity of Scarborough those forms are well depicted and may be readily compared. The form of Hackness valleys comprised within the high land of Suffield, Silpho and Broxa, which is Geologically insular, may be compared to the branchings of a stag’s horn. And no one can understand the intricate forms in the surface of this ground without traversing the hills as well as the valleys; for on riding along the high side of the elevated plane of Silpho and Broxa moors, even the ends of the valleys are not discernible. Such is the ground of which we have to show the Geological construction composed of insulated parts of some of the most regular strata in the British series….”

Like Smith’s other work, the aim of geologically mapping the Hackness area was to demonstrate the subject’s utility to others, in this case the agricultural industry, “That a knowledge of Geology is the only infallible guide to determine correctly the value of land….To know what plants are best suited to the soil a knowledge of the varieties of soil is necessary, which can only be obtained by an acquaintance with their subsoils and beds of strata upon which they rest, and from which they are respectively formed.”

Format: Hand colouring on lithograph base map on paper. 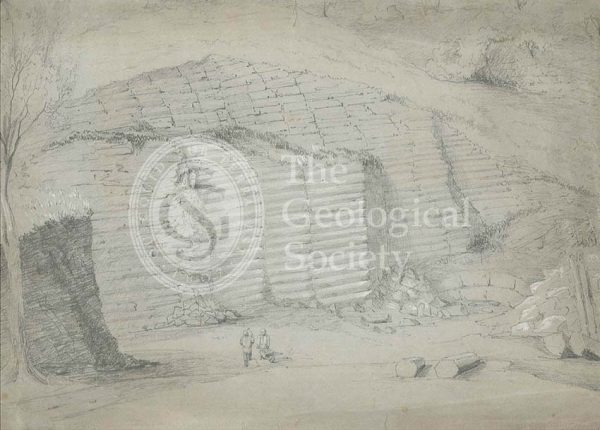 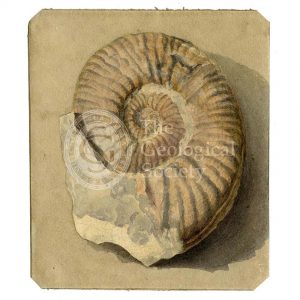 Study of an ammonite»
We use cookies on our website to give you the most relevant experience by remembering your preferences and repeat visits. By clicking “Accept All”, you consent to the use of ALL the cookies. However, you may visit "Cookie Settings" to provide a controlled consent. further details can be found on our Cookie Policy page
Cookie SettingsAccept All
Manage consent